ATILA is a modular finite analysis software that can be customized to meet your specific modeling needs at the lowest possible cost.

Every ATILA configuration includes at least one module in four categories referred to as Environment, Pre/Post Processor, Materials, and Solvers. All the ATILA modules that belong to these categories are described in the "A la Carte" section. For the most part, these modules are independent, which means that they can be added to or removed from your ATILA configuration at any time, as long as there remains at least one module per category.

We also offer ATILA packages, which are configurations that are specifically designed for certain applications. 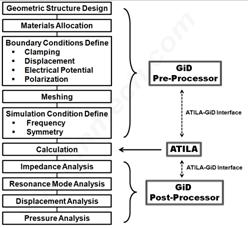 This option includes anisotropic multilayer composite materials with or without losses for axisymmetrical and 3D models. The materials definition includes a matrix and fibers (mechanical properties of the matrix and fibers, volume fraction of fibers). Each layer of fibers in the element may have a different orientation. Elements included: 8-node quadrilateral and 20-node hexahedron; 6-node triangular and 8-node quadrilateral curved shell elements.

Included in this option are anisotropic piezoelectric materials with or without losses for axisymmetrical, plane strain, and 3D models. The material definition includes all 36 mechanical, 18 piezoelectric and 9 dielectric constants, as well as the density. Lossy materials include loss angles for each one of the 63 constants. Elements included: 6-node triangular, 8-node quandilateral, 10-node tetrahedron, 13-node pyramidal, 15-node prismatic and 20-node hexahedron; 6-node triangular and 8-node quadrilateral trilaminar elements (for thin layered piezoelectricmetal-piezoelectric structured).

This item includes anisotropic magnetostrictive materials with or without "t" losses for axisymmetrical, plane strain and 3D models. The material "l" definition includes all 36 mechanical, 18 piezomagnetic and 9 magneticconstants, as well as the density. Lossy materials include loss angles for each one of the 63 constants. Elements inclued: 6-node triangular, 8-node quandrilatreal, 10-node tetrahedron, 13-node pyramidal, 15-node prismatic and 20-node hexahedron; 16-node quadrilateral elements for thin films.

This solver includes the modal analysis of elastic, piezoelectric, magnetostrictive structures, closed fluid domains, and closed hydroelastic systems. A unique variant of this modal analysis is also included and efficiently performs the computation of the resonance and antiresonance modes of piezoelectric and magnetostrictive structures, as well as the effective coupling coefficient. Results include normal frequencies and normal modes, effective coupling coefficient, motional charge, and motional capacitance

For frequency-domain analysis, the harrnonic solver can solve problems that involve elastic, piezoelectric and/or magnetostrictive structures. For acoustic radiation problems, the following situations are possible: computation of the pressure field radiated by a vibrating surface with known displacement field, steady-state (frequency domain) acoustic radiation of elastic, piezoelectric and/or magnetostrictive structures, and analysis of an elastic, piezoelectric and/or magnetostrictive structure excited by an impinging wave. These analyses accept the definition of multiple excitation (even when mixed) and lossy materials. Results include displacements, stresses, pressures, complex electrical impedance, and acoustic radiation quantities.

The periodic solver is typically used for structures such as Alberich panels and 1-3 composites. With this solver, only one unit cell of the panel is modeled. Bloch-Floquet conditions allow extending the cell to an infinitely large panel while insuring accurate accoustic propagation characteristics. In combination with the modal solver, this module can be applied to problems such as the modal analysis of an elastic and piezoelectric periodic structure that is subject to an incident wave. Magnetostrictive periodic structures can also be included as long as the magnetic sources are periodic (constant magnetic field). The results are the normal frequencies and normal modes of the linear hermitic system represented.

When used with the harmonic solver, this module can be applied to the scattering of a plane-wave by a periodic elastic structure, the transmission and reflection characteristics of periodic piezoelectric and/or magnetostrictive structures, and the acoustic scattering and radiation of piezoelectric and/or magnetostrictive structures. Results include the complex displacements and pressures, the electrical potential and current in magnetic sources, the transmission and reflection coefficients, the free-field voltage sensitivity, and the transmitting voltage response.

EQI is a boundary element solver that can be coupled to ATILA to carry out FEM-BEM analyses of scattering and radiating problems in the frequency domain. Unlike the FEM-only case where the whole fluid domain (surface and volume) must be meshed with finite elements, the boundary elements method allows reducing the fluid mesh to the radiating or scattering surface only (linear or surface region). The computation of the far-field pressure is then obtained by numerical integration of the mechanical impedance information at those radiating and scattering surfaces. EQI must be used in combination with the harmonic solver of ATILA. Specific impedance elements are used to enable the ATILA-EQI coupling: 3-node linear, 6-node triangular and 8-node quadrilateral shell elements.

Results of an ATILA-EQI computation include displacements, stresses, electrical impedance, far-field pressures, as well as acoustic radiation and scattering quantities.