The PDUS210 is a complete solution for driving precision and high-power ultrasonic actuators. The amplifier includes high-speed resonance tracking of a series or parallel resonance modes, vibration amplitude control, and analysis functions such as impedance and frequency response measurement. The PDUS210 is well suited to both OEM product integration and laboratory use for research and development. Applications include ultrasonic drilling and cutting, medical devices, dental devices, ultrasonic testing, liquid cavitation, and vaporization.

The PDUS210 is controlled via USB and the included software package. An RS485 interface also provides a straight-forward method to control and monitor the amplifier for automatic test and OEM applications.

The PDUS210 generates a pure sine-wave output which avoids the excitation of secondary resonance modes by the drive harmonics. This makes it ideal for operating at the electrical parallel resonance, or “anti-resonance”. This operating point is close to the mechanical resonance frequency but is less sensitive to changes in load dissipation, which is useful in precision machining applications where constant vibration amplitude is desired.

The PDUS210 is available with standard output voltage ranges from 17 Vrms to 282 Vrms, and current ranges from 0.7 Arms to 11 Arms. These ranges are optimized for load impedances ranging from 1.5 Ohms to 400 Ohms at resonance. For research and development applications, a reconfigurable version is available (PDUS210-FLEX) which uses external output matching transformers that are purchased separately. A transformer kit (TX210-Kit1) is also available, which includes all six standard output voltage ranges at a discounted price.

The following figure plots the mechanical and electrical frequency response of an ultrasonic transducer. The impedance minima at is known as the series resonance, which is approximately equal to the mechanical resonance frequency. At this frequency, the phase response has a high slope and value of zero degrees. Resonance tracking is achieved by varying the drive frequency to regulate the phase to zero. Alternatively, the phase set point can be selected to operate above or below resonance, which may provide higher immunity to load variations. Systems with low quality factor may have phase responses that are non-zero at resonance. In such cases, an impedance response should be performed to identify the desired operating phase. 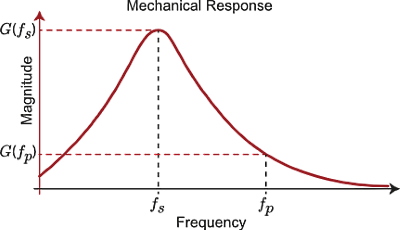 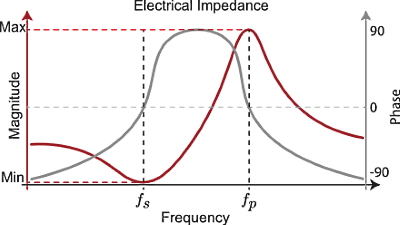 Electrical and mechanical response of an ultrasonic transducer.

The resonance tracking system of the PDUS210 is described in the diagram below. A phase detector (M) measures the impedance phase angle between the primary voltage and current. The phase controller Cθ(s)varies the drive frequency to maintain a constant phase set point θref.

When operating at the series resonance, the vibration amplitude is approximately proportional to the actuator current. Therefore, to minimize sensitivity to load variations, the RMS current should be held constant. To achieve this, the PDUS210 can be operated with either voltage or current set points.

The PDUS210 is available in voltage ranges from 17 Vrms to 282 Vrms, which correspond to impedances ranging from 1.5 Ω to 400 Ω. The optimal choice is determined by the transducer impedance at resonance, and the choice of series or parallel resonance.

The first step is to measure the impedance of the transducer at the series and parallel resonance. This can be performed with an impedance analyser or simply a signal generator and oscilloscope. If possible, these tests should be performed at moderate power with both minimum and maximum load conditions. Fill out the values in the table below:

Table of operating impedance at resonance.

where Irms is the maximum driver current.

where Vrms is the maximum driver voltage.

Custom voltage ranges and optimal impedances are available to provide maximum power for a specific transducers.

The impedance ranges for other common power levels are listed in the following table. For example, all amplifiers will supply more than 150W with a normalized load impedance between 0.71 and 1.4. For the the PDUS210-400, this is equivalent to 71 Ohms and 140 Ohms.

There are four types of overload protection:

At power-on, the power amplifier is shutdown by default and requires an enable command to start.

This overload is triggered when the real power dissipated by the load exceeds the threshold defined in the user interface. An enable command is required to clear this overload.

This overload is triggered when the real power dissipated by the power amplifier exceeds 100 Watts. An enable command is required to clear this overload. Triggering this overload usually means that the load impedance is poorly matched to the output voltage and current range of the amplifier.

This overload is triggered when the heatsink temperature exceeds 70C. An enable command is required to clear this overload. Check the fan and heatsink for blockages. 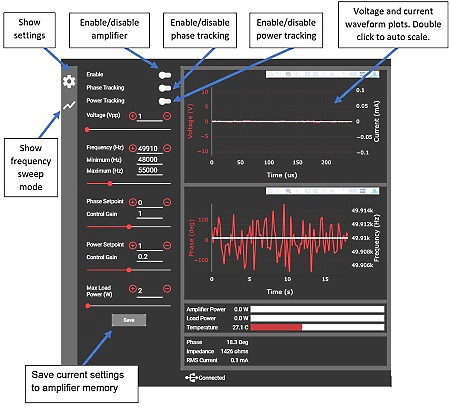 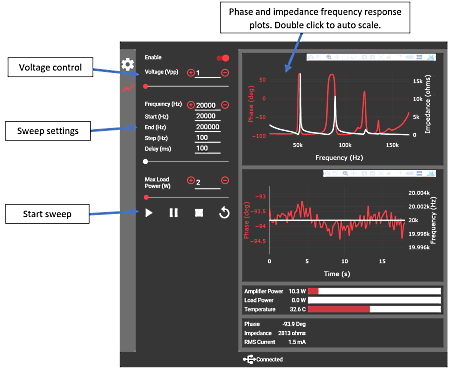 To Track a Resonance 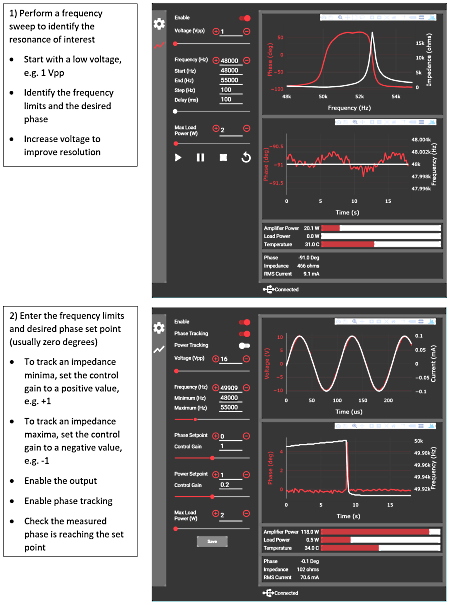 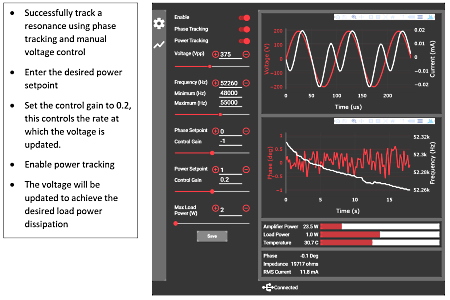 The PDUS210 responds to the commands described in https://github.com/PiezoDrive/RS485-API

An example script for Python (example.py) can be found at https://github.com/PiezoDrive/RS485-API.

For testing purposes or to control the amplifier from a PC, an RS485 USB cable is required, for example, FTDI USB-RS485-WE-1800-BT. The connection diagram below is recommended. A text based application such as Putty can be used to send or receive commands. 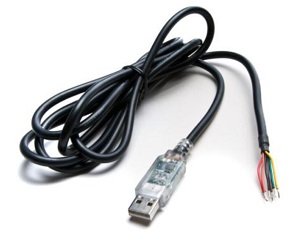 The PDUS210 is guaranteed against manufacturing defects for 12 months from the date of purchase. Contact your distributor at This email address is being protected from spambots. You need JavaScript enabled to view it. for service. Please include the amplifier serial number.